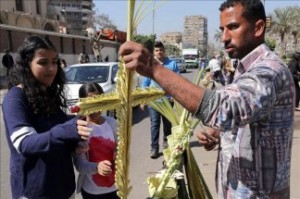 Cairo, Apr 6 (EFE).- At least four people, including one policeman, were wounded in an armed attack on a church in the northern Egyptian coastal city of Alexandria on Sunday, Palm Sunday in the Egyptian Coptic Orthodox church, security sources told Efe on Monday.

The unidentified gunmen opened fire on Sunday night on the Archangel Raphael Church in al-Agami district, around 20 kilometers (13 miles) west of Alexandria, and then fled the scene.

Egyptian forces cordoned the area and launched an operation to capture the perpetrators.

Another attack took place in Cairo on Sunday, when a policeman was killed and two civilians were wounded in a bomb explosion on a major bridge crossing the Nile.

Also on Sunday, Egyptian police killed the founder and top leader of the Ajnad Misr (Soldiers of Egypt) terrorist group, Hamam Mohammed Atiya, in an operation launched in Cairo’s al-Haram district, the Interior Ministry said in a statement.

Security forces say that Atiya organized 26 terrorist attacks against police and other security personnel, most of them in the capital, killing at least 14 people, two of them civilians.

According to the Interior Ministry communique, Atiya was also one of the leaders of the Ansar Beit al-Maqdis (Supporters of Jerusalem) terrorist group, which last November changed its name to Wilayat Sina (the Sinai State) after swearing loyalty to the Islamic State.