[ditty_news_ticker id="27897"] Ecumenical Patriarch: “Every place has one Bishop, regardless of ethnic origin” 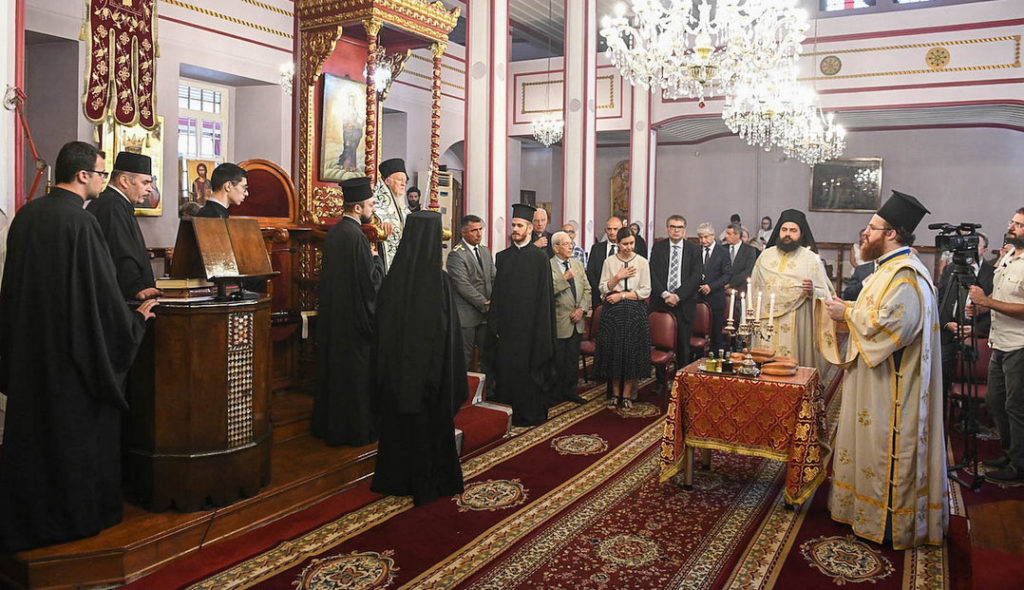 On Friday morning, July 26, Ecumenical Patriarch Bartholomew discussed the importance of observing the doctrines of the Church, as well as its genuine and authentic ecclesiology, as he celebrated the Divine Liturgy at the Church of Saint Paraskevi Pikridiou, which was granted by the Patriarchate to serve the Romanian-speaking community of the City (Constantinople). “Each place has one Bishop, regardless of ethnic origin,” His All-Holiness said emphatically.

“Being baptized in the name of the Father and the Son and the Holy Spirit, we live and grow and continue in the truly great Mystery of the Church as children of her image, and have the conscience that the experience of the proper expression of the Church is the foundation of true life. For it is not enough to believe only in dry and established dogmas without genuine and authentic ecclesiology. Dogma is eternal life only within the Church, otherwise, it is of no benefit. And the first element of this ecclesiology is that each place has one Bishop, regardless of ethnic origin. This is what we all feel in this City of the Theotokos, because we have children of different ethnic backgrounds, who, because of their lives and work in this City, are our own flock; as is the case with you all, the Romanian-speaking community. As well as the fact that if one of the Orthodox members of this City of ours moves to live or work in Bucharest, for example, he or she becomes part of the flock of Patriarch Daniel of Romania. In each place, then, there is one Bishop,” the Ecumenical Patriarch noted in his address in the Community Hall of the church.

“And because you would hear a great deal and you would obviously be aware of the recent actions of the Ecumenical Patriarchate in Ukraine, we also inform you that the Mother Church of Constantinople for decades received messages, appeals, supplications to resolve the ongoing problem in Ukraine. You know that each Bishop theologically has the same fullness of the gifts of the Holy Spirit. But from a hierarchical standpoint, the Church charged the Archbishop of this City, Constantinople, with additional responsibilities.

Conforming therefore with this sacred tradition and recognizing these responsibilities before the Lord, we ourselves as it is our duty, judged favorably the pleading petitions and have convened a Synod of the Ukrainian bishops, not excluding anyone.

From this Synod emerged His Beatitude Metropolitan Epiphanios of Kiev and all Ukraine as Primate, a beloved brother in Christ, to whom we also granted the Tomos of Autocephaly of the Holy Church of Ukraine, this past Theophany. And so, one more daughter Church was born, in the sense of course, of internal administration, as the Church is one, as we affirm one Confession of Faith, and we rejoice and care for it daily, to ensure that it progresses in the Holy Spirit and manages by itself its ecclesiastical affairs.”

In his address, His All-Holiness also referred to the late Patriarch of Jerusalem, Dositheos, and after the Divine Liturgy, he chanted a Trisagion in his memory.

“Dositheos of Jerusalem, brothers and children, can be said to have been distinguished for his strong and correct ecclesiological conscience and his unmistakable belief in our pure faith. His letter, about Kiev and the attempts at the time, to detach it from Constantinople remains monumental. He fell asleep in the Lord at the Phanar, in the Metohi of the Holy Sepulcher, at the age of 66, and was temporarily buried within the grounds of Saint Paraskevi for eight years, and then his relics were transferred to the Monastery of the Forty Martyrs in Jerusalem. During the many years of his Patriarchy, he not only contributed to the Church of Jerusalem, but also to the Great Church of Christ, recognizing the responsibility of Constantinople and nourished by a sound ecclesiastical sense, and for this reason, we are eternally grateful to his example.”

Concluding his address, Ecumenical Patriarch Bartholomew urged members of the Romanian-speaking Community of the City to continue to struggle for the good and true witness of Jesus Christ and to cultivate Orthodox belief and morality. “We, as your spiritual father, also have the responsibility for your souls, and we are beside you, vigilant and praying ceaselessly for you, having secured for you a good priest, Father Sergio Vlad, who is sure to teach you that you are an honored flock of the Holy Archdiocese of Constantinople and that your Patriarch loves you very much and unconditionally.”

The Divine Liturgy was attended by the General Consul of Greece in the City, Ms. Georgia Soultanopoulou, and the Romanian Consul in the City, Mr. Alexandru Opaschi.

Share. Twitter Facebook Pinterest LinkedIn Tumblr Email
Previous ArticleCOMMUNIQUÉ of the 22nd Church Assembly-Sabor of the Serbian Orthodox Dioceses in the US
Next Article SOC hierarch: Jerusalem – mother of all Churches not Rome or Constantinople