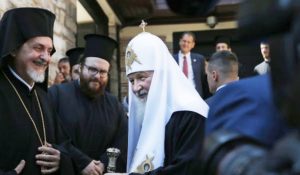 Constantinople “plays a dangerous game” as it has its own schism

“Evident response decision is to set up dioceses in Turkey, where there are minimum ten times as many members of the Russian Orthodox Church even if we count only those who permanently live in the country. And if we take into account five million of our tourists who come to Turkey every year, it is absolutely different arithmetic calculations,” Silantyev told Interfax-Religion.

He stressed that many Orthodox believers who come to Turkey usually look for a church where they can pray.

“On Cyprus many churches really hold services in Russian, though there are no so many our tourists in the country, but if we open such churches in Turkey, in Istanbul, on resorts there will be crowds of pilgrims,” Silantyev said.

According to him, the Moscow Patriarchate could display interest to the Turkish Orthodox Church, which is small, but officially recognized in Turkey, “and the Russian Church could recognize it an heir of the Constantinople Patriarchate of the time of the Byzantium Empire.”

“The Constantinople Church has its own schism and nothing prevents us from using this schism as they use ours. Certainly, such suggestions are bold, but they can be discussed in such discourse which we see today”, Silantyev said.

According to Silantyev, Constantinople “plays a dangerous game, abysses of schism can open not only from our side, but also from the side of the Constantinople Church.”

It was reported that a day earlier the Patriarchate of Constantinople appointed two exarchs in Kiev as part of preparations to grant autocephaly to the Orthodox Church in Ukraine. Such was Constantinople’s response to the request by President Petro Poroshenko to issue a tomos for the creation of the united local Church in Ukraine.