Source: Handwritings On the Wall — Musings of Orthodox Thinkers 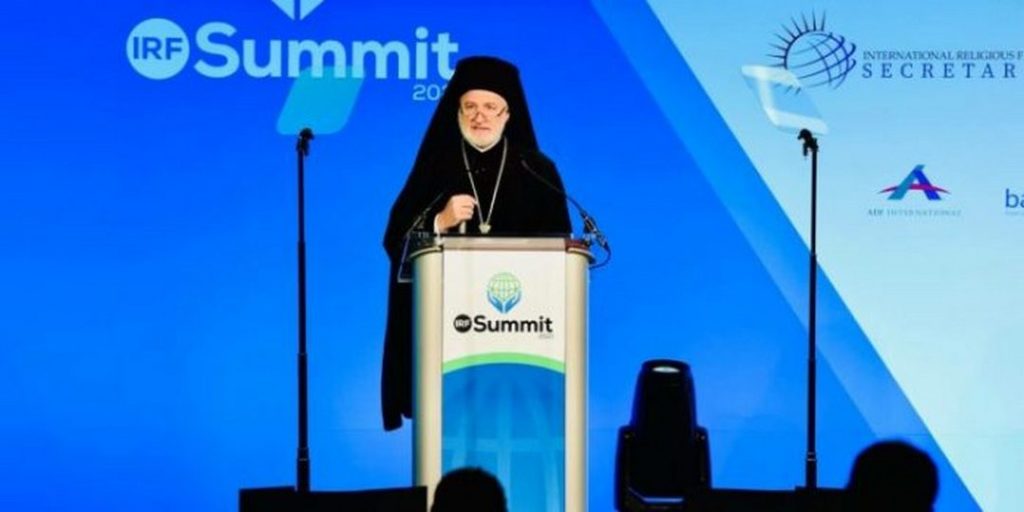 His address at the International Religious Freedom Summit

Archbishop Elpidophoros has caused consternation among the Orthodox faithful by the speech that he gave at the International Religious Freedom Summit held in Washington D.C., 15 July 2021.  In the speech he stated:

When you elevate one religion above all others, it is as if you decide there is only one path leading to the top of the mountain. But the truth is you simply cannot see the myriads of paths that lead to the same destination, because you are surrounded by boulders of prejudice that obscure your view.

This particular passage was excerpted and made into a widely circulated meme on the Internet.  Some saw this excerpt and took it to mean that Elpidophoros was suggesting that there are many ways to salvation.  It generated a flurry of criticism on various blog sites.  I was unaware of the offending paragraph when I was asked for my thoughts on Elpidophoros’ speech.  I read through the text of his speech twice.  I was a bit baffled by the wordiness of the text and the highfalutin language he used.  I finally found the stinking sardine in the pile of waffle (Elpidophoros’ speech) thanks to the Monomakhos article and a comment from a clerical friend.

At first, I didn’t catch the remark about “myriads of paths” mostly because Elpidophoros gave the speech in what appears to have been a secular, political context—the International Religious Freedom Summit.  As an American, I am very sympathetic to a secular state and to religious pluralism.  As a Christian, I believe that Jesus is the only way to the Father.  As an Orthodox Christian, I believe that the Orthodox Church is the one true Church.  So how does one speak as an Orthodox Christian to a diverse non-Orthodox setting like the Summit?  Answer: With care and nuance.

I gained a better understanding from a YouTube video in which former U.S. Senator, now U.S. Ambassador, Sam Brownback was interviewed on EWTN about the Summit. Brownback explained that the Summit is bringing together major leaders of the different faiths from all over the world.  He went on to explain: “We’re not talking theology.”  That gave me a different perspective on the Summit—a more positive one.  Too many of the conflicts in the world today have been exacerbated by religious ideology.  We need religious leaders to encourage their followers to peacefully coexist with their neighbors of different faith backgrounds.  In my opinion, Archbishop Elpidophoros could have done a better job of bracketing his comment about having only one path leading to the top of the mountain, i.e., that he was talking about state-religion relations, not about theology in the usual sense.  Loosely read, Elpidophoros’ mountain metaphor can be construed as an allusion to a universalist soteriology—an affront to Orthodoxy.  Read from a secular, political angle, it can be understood as advocating the protection of religious freedom, something American Orthodox Christians can affirm.  It seems to me that, unlike Ambassador Brownback, who spoke with nuance and sensitivity, Archbishop Elpidophoros stumbled in his speech and gave unnecessary offense to some Orthodox Christians.

As I see it, Elpidophoros’ challenge is how to speak to a non-Orthodox audience while being faithful to Orthodox Tradition.  I believe that it is very desirable that Hagia Sophia be restored as an Orthodox house of worship.  However, for Elpidophoros to drag in the Ukrainian mess and to make a veiled swipe against the Moscow Patriarchate’s alliance with the Kremlin is to open a huge can of worms.  How does Elpidophoros reconcile his veiled swipe at the Moscow Patriarchate with the historic Orthodox teaching of symphonia?  From the political or governmental perspective, there is a certain confusing ambiguity in Archbishop Elpidophoros’ speech: Is he speaking as a leader of Orthodox Christians who reside in the U.S. or on behalf of Patriarch Bartholomew, who resides in Istanbul, Turkey?  And, who has a vested interest in the Ukrainian-Russian controversy?  Put another way, does Elpidophoros speak for us American Orthodox Christians?  It has been two years since he migrated to the United States in 2019.

Archbishop Elpidophoros’ importance at the Summit lies in the fact that he represents and leads the largest Orthodox jurisdiction in the U.S. — the Greek Orthodox Archdiocese. There is a certain irony in Elpidophoros’ presence at an international summit on religious freedom when he, in his capacity as Patriarch Bartholomew’s personal agent, perpetuates Greek colonialism in the U.S.  It is time for there to be an American Orthodox Church.  It is time that externally imposed hierarchs be returned to Istanbul where they were born and for an American-born hierarch to be elevated as primate for the autocephalous American Orthodox Church.

Robert Arakaki, Ph.D. is a political scientist and Asian-American convert to Orthodoxy.