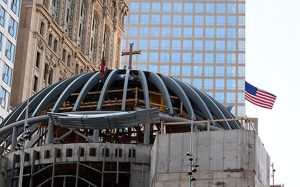 The disastrous navel-gazing of the current leadership has escalated due to the financial woes of the archdiocese and the scandal surrounding the cost overruns in the much-delayed construction of Saint Nicholas Church at the World Trade Center in New York.

The Greek-American community is faced with a deep crisis. It’s time the Phanar – the Orthodox Ecumenical Patriarchate – made some important decisions before it’s too late.

If it fails to appoint a new archbishop soon to replace the outgoing Demetrios or if it does not make the right choice, it will lose America. And if it loses America, it will lose everything. It is from there that it draws a large part of its power and economic support.

Who would want to see such a development? And who can disregard the profound implications that would result from the loss of Constantinople’s primacy in the Orthodox world? These questions should concern those who are honestly concerned about the fate of the Greek-American community.

The ties have already loosened. Assimilation is proceeding fast, because there is no institution that can effectively bring together the descendants of Greek migrants in the United States. Following the retirement of Archbishop Iakovos of America, the prestige and influence has waned despite the valiant efforts of Father Alexander Karloutsos, who was the only one who tried to keep with his tradition.

The disastrous navel-gazing of the current leadership has escalated due to the financial woes of the archdiocese and the scandal surrounding the cost overruns in the much-delayed construction of Saint Nicholas Church at the World Trade Center in New York. The forces promoting an autocephalous or self-governing Orthodox Church are gaining momentum.

Apart from the Church, which plays a key role, the diaspora also needs powerful figures to lead the Greek-American lobby. The timing is good for Greek interests due to the unpredictability of Turkey and Greece’s strategic relationship with Israel and Egypt. The Church and the Greek-American lobby (with very few bright exceptions including the Hellenic American Leadership Council – HALC – a Greek-American advocacy organization) appear stuck in the 1990s.

Greece has never won its major battles without its diaspora taking center stage. Therefore, for this reason, filling the leadership vacuum in the Greek Orthodox Church of America and rallying the Greek-American lobby must be a top national priority.