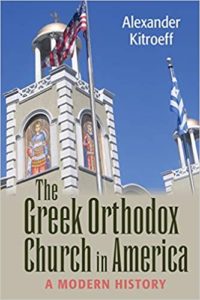 The Greek Orthodox Church in America: A Modern History by Alexander Kitroeff, Northern Illinois University Press, 2020, helps to put Orthodox Christian Laity’s (OCL’s) ministry, influence and accomplishments in perspective. History is a record of changes, and this history chronicles the growth and development of Greek Orthodoxy in America. It chronicles its unique immigrant beginning in the late 1800’s and early 1900’s, as a unique American mutual aid Church Community, to dramatic efforts to transform it into an eparchy serving the global interests of the Patriarch of Constantinople in the 21st century. This history shows that OCL in the last years of the 20th century and first 20 years of this century was a pivotal player in assisting the Church to understand its American flock.

During this time, the Church grew to take on an American Greek identity.  Greek Orthodox Americans identified their ethnic roots through the values of the Church rather than with the Greek nation and Greek ethnicity. The values of the Church and American society converged; and to identify with the Church, was to identify with freedom of religion, other secular values of American society, and the transnational ethos of the Orthodox Church.   Greek Orthodoxy and Greek America converged.

In the early 1990’s, this evolution and balance was interrupted. Orthodox hierarchs in America began to talk about administratively unifying the various Orthodox jurisdictions. The Greek Orthodox Archdiocese played a leadership role in this discussion. The Patriarch saw this discussion as a threat and felt that the Americanization Process had gone too far. He put a halt to it.

Instead, the Patriarch had another vision for his eparchy in the USA.  He used the mid 1990’s as a time to develop his vision of himself as a transnational church leader.  He wanted to play a role on the world stage and be a universal religious leader.  This vision was necessitated by his insecure status in the Turkish/ Muslim state.  He reorganized the Archdiocese and decentralized it, so that all the Archdiocesan hierarchs reported directly to him.  Since 1996, Patriarch Bartholomew has appointed three archbishops who pledged loyalty to him first as a transnational leader.    The Patriarch thinks that American Greek Orthodox, who see themselves as transnational, will provide the support needed to carry out his vision.

OCL, as the only independent Orthodox Christian organization in the USA, speaking truth to leadership during the last 33 years, has: described the changes; called for establishing canonical order which requires one bishop in one city; and supports the creation of a synod of all the canonical ethnic bishops to renew and reorder the Church in the USA.  A canonical, unified, self-governing Church in the USA, that is accountable and transparent in matters of administration and spiritual renewal, strengthens the transnational character of all the patriarchs and Orthodox Christian Church leaders who live abroad in traditional Orthodox lands.

The challenge today for OCL and American Orthodox faithful is: how does this canonical order proceed? Does American Orthodox Administrative Unity matter?  The global, transnational vision of the Patriarch of Constantinople is not acceptable to all Orthodox leaders.  We are at an impasse. Schism has resulted in some regions of the world. How do we assist the world Orthodox leadership to develop a conciliar ethos and discussion model so that they can communicate with each other and move ahead?