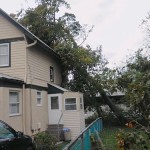 As of Thursday, November 1, 2012, electrical power at the Chancery of the Orthodox Church in America here had yet to be restored, while 20 or so trees—including those blocking the entrance drive—have yet to be removed as the east coast slowly recovers from Hurricane Sandy.

The Chancery will remain closed through the weekend, as will Saint Vladimir’s Seminary and the Chancery of the Diocese of New York and New Jersey, both of which remain without electrical power. A meeting of the seminary’s Board of Trustees, which was to be held Thursday, was cancelled.

Requests for updates from parishes in the New York-New Jersey area are slowly being received as communications are being restored. Calls placed to several communities by the OCA web team did not go through.

According to Archimandrite Christopher [Calin], Holy Virgin Protection Cathedral on Manhattan’s Second Street remains without power, but did not sustain damage. He knew of one parishioner who lost everything in the storm, adding that there may be others.

Power also has yet to be restored at Saint Nicholas Church, Whitestone, NY, although Archpriest Joseph Woodill, rector, reported that the rectory roof sustained damage as a result of a downed tree. [See accompanying photograph.]

“We continue to ask for prayers and expressions of assistance from the clergy and faithful of the OCA,” said His Eminence, Archbishop Nathaniel, Locum Tenens of the Metropolitan See. “I have spoken to my brother bishops, all of whom are concerned for our faithful and parishes and their safety. Those who wish may offer support through International Orthodox Christian Charities, while specific needs will be reported on the OCA web site as they are uncovered.” [See related story here.]

On a positive note, the long-awaited redesign of the OCA home page went “live” on Thursday—fortunately, the site’s servers and most team members are not located in areas immediately affected by the hurricane. The new design provides easier navigation, additional links and other options implemented in response to a detailed study by team members and input received from readers over the past few years.

As communications are reestablished, affected parishes are asked once again to send updates on their status and needs to [email protected].