In Support of “A Declaration for Orthodox Christian Unity in America,” No. 1

To the Orthodox Christian Faithful in America:

On July 5, 2022, A Declaration for Orthodox Christian Unity in America was published and widely distributed. It addresses the Assembly of Canonical Orthodox Bishops of the United States of America and solicits the signatures and support of all Orthodox Christians to reassure the Hierarchy of the rectitude of the call for a united, autocephalous American Orthodox Church.

This paper will address concerns raised by those who are still uncertain whether to support the Declaration and the action it promotes.

The first concern addressed is that the establishment of a united, Autocephalous “sister” Church in America alongside the fourteen existing Autocephalous Churches[*]  will weaken the “Mother Churches”.  Those Churches and the dates they were founded or attained autocephaly are as follows:

The four ancient Patriarchates of Constantinople (EP), Antioch, Jerusalem, and Alexandria are in areas that are either hostile or lacking in local support.  No concerns have been expressed that a united, growing, autocephalous American Orthodox Church will weaken the Churches of Antioch, Jerusalem, or Alexandria.

This paper will address concerns that the Ecumenical Patriarchate of Constantinople (EP) will be weakened if the 14 divided, overlapping, ethnic “jurisdictions” in America are united under a single synod of canonical bishops and the Church in America is recognized as autocephalous.

[*] Note: For the purposes of this paper, we do not list the Orthodox Church in America (OCA) which was granted a Tomos of Autocephaly by Moscow in 1970, or the Orthodox Church of Ukraine, whose Tomos was granted by Constantinople on January 5, 2019, because they are not among the 14 Autocephalous Orthodox Churches universally recognized as autocephalous by all the others.  We further note that the OCA is included in the Assembly of Canonical Bishops of the USA, and its de facto autocephaly is unquestioned.

In Support of “A Declaration for Orthodox Christian Unity in America,” No. 2

To the Orthodox Christian Faithful in America:

“I saw the largest and best of the Orthodox Church in the diaspora (that is, in regions where Orthodox Christians live dispersed from their native lands), and I understood how exalted the name of Orthodoxy could be, especially in the great country of the United States of America, if more than two million Orthodox people there were united into one church organization, an American Orthodox Church.”
Ecumenical Patriarch Meletios IV (Enthronement Speech, February 1922)

On July 5, 2022, A Declaration for Orthodox Christian Unity in America (bit.ly/DeclarationUnity) was published and widely distributed.  Addressed to the Assembly of Canonical Orthodox Bishops of the United States of America (ACOB), it solicits the signatures and support of all Orthodox Christians everywhere to convince the bishops here and in the Old World, of the rectitude of the call for a united, autocephalous American Orthodox Church. In this paper, we expand on the reasons to support the Declaration and the action it promotes.

During the late 19th Century and until the Russian Revolution, the unity of the multicultural ethnic presence of Orthodox Christianity in America was guided by the Russian Patriarchate working in a conciliar manner with other ethnic hierarchs.  These pioneer leaders, including Saints Tikhon and Raphael (Hawaweeny), realized that the unique situation in the vast geographic area of the North American Continent and the pluralistic social order of the New World required a unified Orthodox Christian Church.  This thrust for unity was interrupted by events outside of the boundaries of North America.  The Russian Revolution had consequences which affected the development and expansion of Orthodoxy in the United States.  This historic event contributed to the fragmentation of New World Orthodoxy into ethnic jurisdictions. The Standing Conference of Orthodox Bishops of America (SCOBA) attempted to address this fragmentation at Ligonier in 1994 to no avail, because the foreign overseers did not support this effort.

SCOBA Bishops in 1994 understood that a new era should begin, because the Church in America under its leadership had developed reputable theological seminaries and educated clergy to meet the unique needs of the faithful in North America.  The Church created Orthodox Christian education programs and built and maintained parishes, to cite a few of the major accomplishments.   The Church developed stewardship programs that not only finance its infrastructure but also generously provide financial support to the Mother Churches. Despite the heroic accomplishments of the early immigrant generations, the continued fragmented administrative structure of this mature Church in North America impedes efforts to fulfill its mission.  Instead of growing the Church, we are seeing increasing declines in membership and participation across jurisdictions.

Recognizing this uncanonical situation, bishops representing all of the universally-recognized autocephalous Orthodox churches established the Assembly of Canonical Orthodox Bishops in the United States in 2009, to address the issue of fragmentation and disunity characterized by more than one bishop in one city.  Still, little progress has been made on the issues that fragment and disunite Orthodoxy in the United States.  This lack of progress is the result of the fact that all the Orthodox bishops, except for the synod of the Orthodox Church in America (OCA), are appointed and directly responsible to the foreign patriarchs and bishops from abroad who appointed them.

Even in this 21st century, external forces are responsible for the canonical disorder of the Church in America.  This fragmentation keeps the Church in America from developing and fulfilling its Apostolic mission to bring the Good News of the Gospel to the people of the Americas. Autocephaly will empower the Bishops of the Assembly to unite and grow the Church.

Unity of the Orthodox Christians in the USA brings together the resources of the 12 jurisdictions (i.e., financial, human, intellectual, spiritual, liturgical, musical) of the diverse Orthodox faithful.  This would make Orthodoxy in America a more viable, diverse, religious group in North America.  Our unity outreach would be enormous.

Presently, we often have little presence in the public square of our home communities.  We have fragmented philanthropy, education, care for our children, seniors and families. Few institutions exist to serve the wider community.

The Assembly of Bishops needs to transform itself into the synod of bishops in North America and elect its own head according to Orthodox doctrine and tradition.  This relevant transformation of administration will also have consequences and ripple effects that will spread beyond Orthodox Christianity and affect the schismatics and iconoclasts. Transforming the administrative life of the Orthodox Church in North America will rekindle outreach, commitment and renewal of our 2,000-year-old Apostolic Church.

Orthodox faithful of all ages want to be part of a church community that shares its gifts with its neighbors and builds community. They want the Light of Orthodoxy to shine and not hide under a bushel. Let the Comforter, the Spirit of Truth, present everywhere and filling all creation, guide us.

Support for the Declaration for Orthodox Unity in America is critical, because it signals that clergy and laity understand the importance of working together in the process of renewal of Orthodoxy in the United States. The increasing trend of apathy and nominalism is the result of ignoring our history and practices.  We must stem the tide of decline to avoid the result we do not want: a no-growth “remnant” Church in the United States.

Let us be guided by Patriarch Bartholomew’s charge to the Assembly of Bishops meeting in Dallas, Texas, in 2014.  He said in part: “… the time has surely come to move beyond words to actions.  We know much better than what we actually do. We are called to put our theory and theology into practice.  We are called to move beyond what is ‘mine’ and what is ‘yours’ to what is ‘ours’.  From now on, this is how we should conceive and conduct all of our ministries and resources, all of our departments and initiatives. Otherwise, we do not practice what we preach.  It is really up to us to accept the challenge or refuse the call.” His message supports “A Declaration for Orthodox Unity in America.” You can participate by adding your name to the Declaration.
PUBLIUS 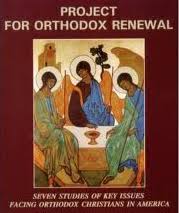 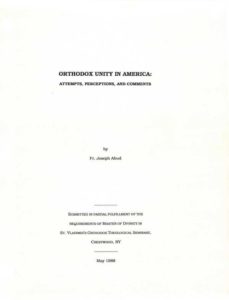 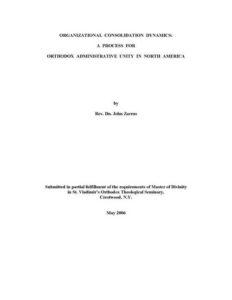