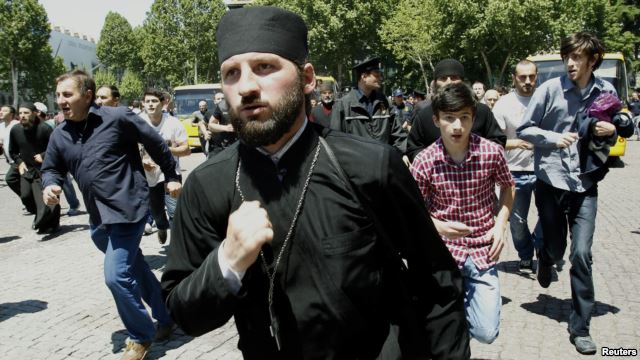 Orthodox clergy and Orthodox Christian activists clashed with gay-rights activists at a rally in Tbilisi marking International Day Against Homophobia on May 17.

Many were shocked on May 17 to see a phalanx of black-robed Orthodox clergy break into a trot and lead an angry mob in an attack on a gay-rights rally in the Georgian capital, Tbilisi.

Although the official Orthodox hierarchy in Georgia denounced the violence that left 17 injured, Georgian Patriarch Illia II had called on authorities the day before to ban the rally as an “insult” to Georgian traditions.

Across Eastern Europe, societies in countries such as Georgia, Russia, Serbia, and Moldova are pushing, each in its own way, to modernize and reform — and movements supporting the rights of women, ethnic minorities, gays, and lesbians are making unprecedented inroads. What many also have in common, though, are Orthodox churches that often act as brakes, politically and socially conservative forces that tend to view any innovation as a foreign threat aimed at destroying sacred national traditions.

Zaza Davitaia was one of the Georgians who answered the call of conservative Orthodox clergy and participated in the routing of the gay-rights rally.

“I give my support to those who are gathered here. We are against a rally that contradicts our Georgian morals and traditions,” Davitaia said. “[Gay-rights campaigners] receive financial support from some organizations abroad and they wanted to hold a demonstration against Georgian morals.”

A similar, albeit less dramatic, situation unfolded earlier this month in the Serbian capital, Belgrade. About 3,000 people gathered there on May 10 to protest a recent EU-brokered normalization agreement between Serbia and neighboring Kosovo, which nationalist Serbs view as an integral part of their country. The demonstration was organized by two conservative Orthodox bishops, although Patriarch Irinej distanced himself from the action.

One of the organizers, Bishop Atanasije, told demonstrators that Serbian Prime Minister Ivica Dacic is at risk of sharing the fate of pro-European Prime Minister Zoran Djindjic, who was assassinated in 2003 by ultranationalists opposed to his reform efforts.

“The prime minister was talking about how he was for realist politics, but only for secular Serbia. He is not interested in the heavenly Serbia,” Atanasije said. “Unfortunately, that was what Djindjic used to say. And we know how he ended. But we will let God judge. There is no secular Serbia without the heavenly one.”

The clerics then held a “prayer for repose” for Dacic and the government – a shocking move since the rite is only performed for the dead.

Likewise, conservative clergy in Moldova have fought against key elements of that country’s effort to integrate with the European Union, including most recently a law barring discrimination on the basis of sexual orientation, among other things. One prominent conservative cleric condemned what he called the “sodomization” of Moldova.

Geraldine Fagan, a Moscow-based correspondent for the religion-focused news agency Forum 18 and author of the new book “Believing in Russia: Religious Policy After Communism,” says that religious nationalism, although condemned as heresy in the 19th century, is a profound tradition in Orthodox cultures.

“In many cases, Orthodox churches were ministering to a single ethnic group, and this gave rise to nation-states,” Fagan told RFE/RL in an e-mail interview. “And there is a lingering sense in places across the Orthodox world that national security depends in a profound — even mystical – way on the nation remaining Orthodox.”

Likewise, Tbilisi-based religious scholar Beka Mindiashvili has noted an anti-Western strain in the preaching of many Orthodox clergymen, who he says criticize the West for “preparing the way for the Antichrist because they are denationalized.”

To be sure, most organized religions have historically tried to defend what they deem traditional and fundamental values against the tides of modernization. But none in Europe is doing so as aggressively as Orthodox Christianity.

Moreover, unlike in the secular West, Orthodox churches are traditionally comfortable in close relationships with autocratic governments, as long as they formally adhere to Orthodoxy. In cases such as Russia, the shared perception that the outside world is hostile and ill-intentioned has proven a solid foundation for church-state collaboration.

Last month, even as the government of President Vladimir Putin was branding Russia’s leading nongovernmental organizations as “foreign agents,” Russian Orthodox Patriarch Kirill issued a statement describing feminism as “very dangerous.” Women must be “focused inward,” he said, and if they are not, “then everything will be destroyed – the family and, if you wish, the motherland.”

Journalist Fagan says that in cases where the government drifts too far in the direction of authoritarianism, a church’s close relations with the authorities can undermine its moral authority and credibility. This is happening now in Belarus, she says.

By comparison, the phenomenon of Orthodox churches cohabitating with secular, democratic governments — something fundamental in the West — is, at best, a novelty across the region.

Chisinau-based political analyst Igor Botan says the process of negotiating this novelty is an essential aspect of current Moldovan sociopolitics.

“What we see today in Moldova, which is a strictly secular state by law, is the church regularly stating its positions in statements to believers,” Botan says. “On the other hand, there has been pressure [from the state]on the church to keep out of politics. And, to a certain extent, the church has tried to do so.”

However, unlike Serbia and Georgia where the local Orthodox churches are culturally tied to the Russian church but not canonically subordinated, Moldova’s church is subject to the Moscow patriarchate and thus heavily influenced by it – and the Kremlin, Botan says.

“My opinion is that the Moldovan Orthodox Church would advocate abandoning the country’s current EU integration drive because the church is subordinated to the Russian Orthodox Church, which has recently stated that the Republic of Moldova is part of the so-called Russian world,” Botan says.

In Georgia and Serbia, as well, governments are pushing back against conservative church elements. Georgian Prime Minister Bidzina Ivanishvili said on May 14 that sexual minorities exist in Georgia, have rights, and that society will “gradually get used to it.”

Serbian Prime Minister Dacic said that the statements made by Orthodox clergy at the May 10 demonstration in Belgrade were “totally inappropriate” and said they were behaving “as if they live in the time of the Inquisition.”

He admitted to “sometimes wondering what dear God did to deserve to be represented on Earth by such people.”

The struggle between secular governments and conservative Orthodox elements in Eastern Europe could be a long one. However, the examples of Greece, Cyprus, Romania, and Bulgaria show that Orthodoxy and European integration are not necessarily incompatible.

Forum 18’s Fagan, however, says that the Orthodox leader who has gone the farthest in embracing so-called Western values – particularly religious freedom – is Patriarch Bartholomew of Constantinople.

“But this is not so much to do with his geographical position further west or east as it is to do with him being a leader of an embattled minority in Turkey,” Fagan says. “It seems this is the key to appreciating what oppression feels like.”