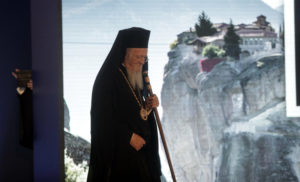 Ecumenical Patriarch Bartholomew has reprimanded Church of Bulgaria Patriarch Neophyte for supporting a breakaway church in the Former Yugoslav Republic of Macedonia (FYROM) as “Macedonian,” with Greece still trying to settle a 26-year-long dispute with that country over what its name should be.

The strongly worded statement by Bartholomew, spiritual leader of the world’s Orthodox Christians, came after the Bulgarian Church agreed to acknowledge and be the “mother church” of “Macedonia,” which is considered “schismatic” by the Ecumenical Patriarchate in Istanbul.

“The action of the sister church of Bulgaria was wrong. It complicates matters. The mother church of all Balkan nations is that of Constantinople,” he said, adding that this is what history says and that the Bulgarian church has no right to normalize the “Macedonian” one, said Kathimerini.

Patriarch Neophyte of Bulgaria has repeatedly claimed that Bulgaria should support the church of “Macedonia” in its attempt for recognition and integration even though Greece and FYROM haven’t settled on an agreement for a new composite name.

But anti-nationalist Prime Minister and Radical Left SYRIZA leader Alexis Tsipras has said he’s willing to let FYROM keep the word Macedonia – that of an ancient abutting Greek province – and remove Greek vetoes against getting into NATO and the European Union.

Tsipras said he’s willing to accept a name with a qualifier, such as Upper Macedonia, but said it’s dependent on FYROM changing its Constitution to remove irredentist claims on Greek lands.