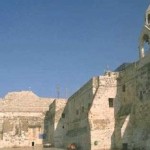 Church of the Nativity, Bethlehem

RAMALLAH, October 17, 2012 (WAFA) – The Palestine Liberation Organization and France Wednesday signed an agreement to repair the roof of the Church of Nativity in Bethlehem.

The 200.000 euors agreement was signed in the Muqata and in the presence of Palestinian and French officials.

A presidential committee established on December 15, 2008 a special fund to repair the roof of the Church of Nativity in cooperation with the three Christian denominations that control the church – the Greek Orthodox, the Custodian of the Holy Land, and the Armenian Orthodox church. The Palestinian Authority contributed US$1 million to the fund and the private sector contributed $450,000.

The French Consul General in Jerusalem, Frederic Desagneaux, who signed the agreement on behalf of his government, praised efforts by the PA to preserve Christian holy sites and heritage.

He said a special fund has been set up in France to collect donations from various French institutions to repair the Church of Nativity.

Share. Twitter Facebook Pinterest LinkedIn Tumblr Email
Previous Article“OCA. We are a city on a hill” – Svetlana Vais interviews Mark Stokoe
Next Article Special Conference on the Issues at Stake at the Future Pan-Orthodox Council