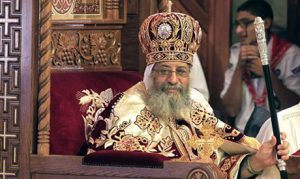 Pope Tawadros II, the head of Egypt’s Coptic Orthodox Church, called Tuesday on Egyptian Coptic expats in the US not to demonstrate in front of the White House hours before a planned protest over attacks against Christians in Egypt.

“I oppose any demonstrations that might harm Egypt and cause conflict with higher authorities…Please, for Christ’s sake, avoid this behaviour that is not acceptable in any of our churches in the USA,” said the pope in statement published on Coptic World, the official website of the Coptic Orthodox Church.

On July 22, Coptic Solidarity, a non-profit organisation, called the demonstration for today in the wake of recent sectarian attacks in Upper Egypt.

The pope argued that such demonstrations do not help or change the situation, but instead “stain the image of Egypt locally and internationally,” adding that Egyptians are now capable of dealing with their problems and its consequences.

“These demonstrations disfigure our country and fuel evil. Our circumstances are completely different from those of five or 10 years ago, and we cannot afford to deal with new evolving events using old ways,” he said.

In recent months, a number of high profile sectarian attacks against Coptic Christians in Upper Egypt resulted in injuries to many individuals, some deaths, and damages to homes and businesses.

Two weeks ago, Muslim assailants set ablaze Christian homes in the village of Abu Yacoub in Minya over a rumour that a Christian intended to turn a kindergarten into a church.

Also last week, a Muslim mob stabbed a Christian to death in the village of Tahna – also in Minya – during a street argument.

Various estimates suggest that there are anywhere between 300,000 and one million Egyptian Coptic Christians currently living in the US, making it one of the largest Coptic communities abroad.

Last Thursday, Egypt’s President Abdel-Fattah El-Sisi stressed to Pope Tawadros in a private meeting that all Egyptians are equal in rights and duties in accordance with the country’s constitution.

The Egyptian president praised the “wise and patriotic” spirit that Egyptian Christians have displayed in dealing with challenges throughout the past few years, and warned of the danger posed by those who would use religion as a tool for division or to foster extremist ideas.

The pope in return assured El-Sisi that all citizens should stand together to work for the country’s interests and accomplish the aspirations and hopes of the Egyptian people.

Earlier last week, Pope Tawadros told a parliamentary committee that the country’s legacy of religious unity is currently being “defaced” in the wake of sectarian attacks.

“The incidents we heard about are very painful. On my part, I’m patient and enduring, but there have been incidents that warn of danger,” a Coptic Church statement quoted the pope as saying.

The pope cited a report compiled by the church showing that in the past three years there have been 37 attacks on Christians; an average of one attack per month.

In May, Muslim villagers torched seven homes of Christians and assaulted a Christian man’s elderly mother in Minya’s El-Karm village, stripping her and parading her naked in public. The assault was sparked by rumours that the man was having an illicit relationship with a Muslim woman.

Following these incidents, El-Sisi warned of anyone attempting to drive a wedge between Egyptians and vowed to hold violators accountable.

There are no official figures on the number of Christians in Egypt, but informal numbers suggest that Christians make up around 10 to 15 percent of Egypt’s population of 91 million.