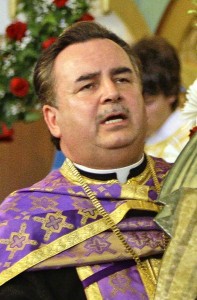 (Milwaukee Journal Sentinel / April 17, 2009)
The Rev. James Dokos is accused of writing checks for tens of thousands of dollars to benefit himself, friends and family and to pay his personal credit card bills from the trust that he controlled, but that was set up primarily to benefit a Milwaukee church, according to a criminal complaint prepared by the Milwaukee County District Attorney’s office.

The Rev. James Dokos, 62, stood before a court commissioner in a Milwaukee County courtroom during the brief hearing, where his bond was set at $5,000. Because it’s a personal recognizance bond, he was not required to post any money to be released.

Wearing a black suit with a clerical collar and smiling as he entered the courtroom, Dokos did not speak during the hearing, and no mention was made of a medical emergency that caused him to miss his previous court appearance. He had also failed to appear at an earlier hearing because of car trouble, his lawyer said.

Assistant District Attorney David Feiss agreed to the $5,000 bond, saying Dokos has been cooperative during authorities’ investigation into the priest’s handling of a trust fund intended to benefit Annunciation Church in Milwaukee. Dokos was the longtime pastor at the Milwaukee church before moving to Saints Peter and Paul Church in Glenview in 2012.

Dokos is accused of improperly spending more than $100,000 from the trust fund, allegedly writing checks to cover credit cards bills, other personal expenses and gifts to other officials in the Greek Orthodox church.

But his attorneys have denied that Dokos engaged in any wrongdoing. They have said Annunciation members sought the prosecution against him to cover up their own mismanagement of church funds.

Dokos, who has been suspended from his duties at the Glenview church until the case is resolved, did not comment following the court hearing, nor did his attorneys.

Annunciation member Stephanie Rauch, who was Dokos’ secretary at the Annunciation until 2001, said she liked Dokos but added that church members usually either loved him or hated him.

“None of us are perfect,” she told reporters outside of the courtroom where Dokos was supposed to show up on July 14. “It’s too bad. He was a good priest. … He helped people.”

Rauch was present in court again today, and said she was “looking for answers.”