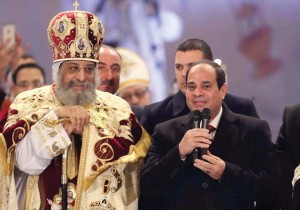 Egyptian President Abdel Fattah al-Sisi became the first president to attend mass at a church in Cairo, on the Coptic Christmas Eve.

The short visit on Tuesday night came after masked men shot and killed two Egyptian policemen earlier in the day as they stood guard at a Coptic Christian church in Minya, 220 km. south of Cairo.

“It was necessary for me to come here to wish you a Merry Christmas, and I hope I haven’t disturbed your prayers.

Throughout the years, Egypt taught the world civilization and humanity, and the world expects a lot from Egypt during the current circumstances,” Sisi said, the Mada Masr website reported.

“It’s important for the world to see this scene, which reflects true Egyptian unity, and to confirm that we’re all Egyptians, first and foremost.

We truly love each other without discrimination, because this is the Egyptian truth,” Sisi continued.

Coptic Christmas fell on Wednesday, in accordance with the Julian calendar, and security was tightened at churches ahead of the holiday after many attacks on Christian targets over the years.

Copts have supported Sisi’s rise to power, seeing him as capable of providing better security for their community.

Following the fall of president Mohamed Morsi of the Muslim Brotherhood in July 2013, a number of churches and Christian properties were burned and destroyed in the impoverished south that is home to many Christians.

Christians have been physically attacked and sometimes murdered.

Many Islamists blame the Christians for supporting the coup that overthrew Morsi.

Separately on Tuesday afternoon, an Egyptian police officer was killed while dismantling a homemade bomb near a police station in the Giza Governorate, outside Cairo, security sources said.

The army’s spokesman said on Tuesday it killed 11 terrorists and arrested 29 from Saturday to Monday in ongoing Sinai operations, the Aswat Masriya website reported.

Residents in northern Sinai discovered the corpses of two men on Wednesday who appeared to have been killed by shots to the head.

Reuters contributed to this report.