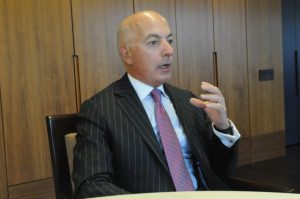 In his remarkable speech he presented concrete and decisive proposals designed to turn the finances of the Archdiocese around as stressed the need for total transparency.

The National Herald was able to obtain a copy of the speech which we publish in its entirety:

Your Eminences, Your Graces, most Reverend Clergy, brother Archons of the Order of St. Andrew,and fellow members of the Archdiocesan Council,One year ago at this meeting, Vice Chairman Archon George Tsandikos, Secretary Ms. Cathy Walshand I were elected by this Archdiocese Council to serve as Officers. We serve only with the blessing of, and under the direction of, His Eminence, Archbishop Demetrios, Geron of America.

We agreed to the following goals:

The reason for the GOA’s structural operating deficit, accumulated financial obligations and the current acute cash funding issues it is experiencing today is very simple: a deficiency in proper internal controls.

Prior to even discovering the GOA’s financial difficulties, the Officers realized the GOA was deficient in internal controls, practices and procedures with respect to controlling expenditures. The discovery came in two forms. First, in the beginning of 2017, we reviewed the deficiency reports in the Grant Thornton audit reports from recent years. Second, we asked basic questions of managementand staff. A logical question is why were the deficiency reports not addressed before? We do not have a concrete answer, because this period predates our work, but we do have an observation: The reason is a problem of weak internal controls and processes. It is our understanding that the primary contact with Grant Thornton was the former Director of Administration and an audit committee that included the Chair of the Finance Committee, a breach of basic financial practices. The auditor should have met with an independent committee, or with the Finance Committee as a group, not staff or insiders. That is not done and will not happen again. This practice will be corrected promptly.

Specifically, a new audit committee comprised of qualified Archdiocesan Council members will be appointed to serve through the end of July 2018. Improvements to the Regulations to establish a completely independent committee will be proposed to the 2018 Clergy-Laity Congress.

With the blessing of His Eminence, Archbishop Demetrios, we started the process of implementing internal controls beginning in April 2017.

Concurrently in May 2017, the GOA engaged Grant Thornton to conduct a thorough operations review intended to provide recommendations on how to create a world-class ecclesiastical not-for-profit institution from an internal controls perspective. This report cost $150,000, and was paid for by a private donor. The final report is expected to be received next month and will be shared with the Executive Committee.

Creating and implementing internal controls is a complex process that must be implemented with care. External resources will be required. Each process and procedure will need to be documented, implemented, communicated and enforced. This difficult and complex process will require time and resources, but is essential for order, structure and integrity in the operations of the Archdiocese.

In furtherance of establishing proper governance and internal controls, processes and procedures, with the blessing of his Eminence, Archbishop Demetrios, the following actions were taken:

Upon becoming CFO in April 2017, Father Baroody conducted a ninety day review of the GOA’s finances between April and the end of June. In July, less than four months ago, Father Baroody presented his initial report to His Eminence, Archbishop Demetrios, and the Officers. In July, we were extremely disappointed when Father Baroody informed us that the GOA had an estimated structural operating deficit of approximately $4 to $5 million for 2017. Historically, a portion of that structural deficit was funded by gracious benefactors, some of whom have fallen asleep in the Lord.

With the blessings of His Eminence, Archbishop Demetrios, and under the leadership of His Grace,Bishop Andonios, immediate and decisive actions were taken to reduce operating costs to bring revenues and expenditures into balance.

Beginning in August actions were taken to reduce the GOA’s operating cash costs by approximately $6.5 to $6.7 million. These actions included:

I ask you, humbly and respectfully, to consider the magnitude of the cost and spending reductions that occurred within a month of discovering the scope of the structural operating deficit, and I ask you to reflect on how quickly and decisively we reacted to this discovery.

I can confirm that we are exceedingly disappointed that Father Baroody discovered transfers involving funds in restricted and custodial accounts of approximately $4.75 million. We believe that the funds in these accounts were transferred to fund the GOA’s legacy operating deficit. We are proceeding with an examination of all transfers, and will engage an accounting firm to confirm the specific nature of those transactions. We understand it is imperative that all avenues be explored to restore the proceeds to these accounts as soon as possible. We will pursue all options to do so. In the meantime, we believe that proper internal controls have been established to prevent this practice from occurring again.

FINANCE COMMITTEE AND THE BUDGET

The issue of the GOA’s “Official Budget” needs to be addressed. Every two years, the Clergy-Laity Congress approves the “Official Budget”. Speaking as the GOA’s Treasurer and as directly as I can, the facts demonstrate that this “Official Budget” does not reflect the actual financial status of the GOA. Anyone familiar with how organizations operate from a financial perspective, understands that budgets must be established from the ground up, and then monitored month by month, quarter by quarter and annually, for variances, in order to have any integrity. There is a strong recommendation that the Finance Committee meet with the CFO regularly to monitor variances in the new budget that is being developed relative to actual performance. Had that exercise occurred over the past two years,a more realistic and timely understanding of the GOA’s financial position would have been known 18-24 months ago.

The only way for the GOA’s operations and ministries to continue to operate is for the Parishes to fulfill their assessments. I pray that the combination of all the actions taken in the past few months, actions taken to ensure accountability and transparency will provide our Parishes with the level of trust and confidence required to fulfill their critical obligations to the GOA. These actions include new leadership, new people in critical senior management positions, a plan to implement new internal controls, practices and procedures, the establishment of new independent committees, the retention of accounting firms for various audits and reports, and very significant and immediate cost reductions. While we are working hard to transform the GOA, if the Parishes refrain from funding their assessments, the present and future of the Greek Orthodox Church of America will be impacted.

In a short period of time, by the Grace of God, the GOA has made strides to achieve its objectives of accountability and transparency necessary for its mission to proclaim the Gospel of Christ in the U.S.A and beyond.

The Officers, with the blessing of His Eminence, Archbishop Demetrios, and the most Revered Hierarchs of our Holy Eparchial Synod, are working hard to bring order, structure and integrity to the operations of the Archdiocese.

We are people of faith and hope.

While our efforts may take time, we are making great progress.

Now is the time for all of us to work together for our future and the future of our children.

I ask for your prayers as we proceed with our endeavors.

Everything I have said today is with respect and humility.