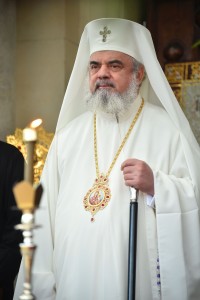 His Beatitude Daniel celebrates on Wednesday, 30 September 2015, the 8th anniversary of the enthronement as Patriarch of the Romanian Orthodox Church (30 September 2007).

The Romanian Patriarch will officiate at the Divine Liturgy, from 09:30, in the Patriarchal Cathedral, assisted by hierarchs, members of the Holy Synod of the Romanian Orthodox Church, priests and deacons.

After the Divine Liturgy, A Te Deum service will be officiated, at 11:30, as a sign of thanksgiving for the divine help received in the faithful service of the Romanian Orthodox Church and the Romanian people.

Next, during the anniversary moment that will take place, at 12:00, Congratulatory messages will be read by representatives of local and central state authorities, as well as of other public institutions.

In the event will participate hierarchs of the Holy Synod, representatives of the local and central state authorities, and of other public institutions, personalities of the Romanian public life, members of the National Church Council and of the Eparchial Council of the Archbishopric of Bucharest, clergy and faithful.