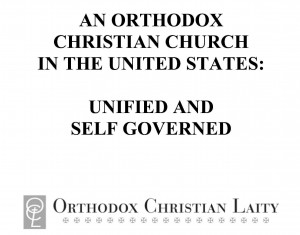 This forum is a place to post thoughts, papers and documents that show the need for an autocephalous, independent, self-governing Orthodox Church in the USA in which the Synod is composed of the bishops of all jurisdictions who meet to elect their own head, approve work of their committees and include the laity and the input of laypeople in the administration of the Church.  The Church is governed to meet the spiritual needs of all Orthodox faithful in the geographic area of the USA and is a Mission Church welcoming all seekers and faithful who want to be part of the Apostolic Church.   The Church is transparent, accountable and Christ-centered, governed by the clergy and laity in synergy with the Holy Spirit.

This first paper to be featured is An Orthodox Christian Church in the United States: Unified and Self Governed. It was published as an Occasional Paper by OCL in 2000 and was distributed throughout the Orthodox Communities.  We are reintroducing it as part of this series, and we will publish new information and also search our archives for relevant material.