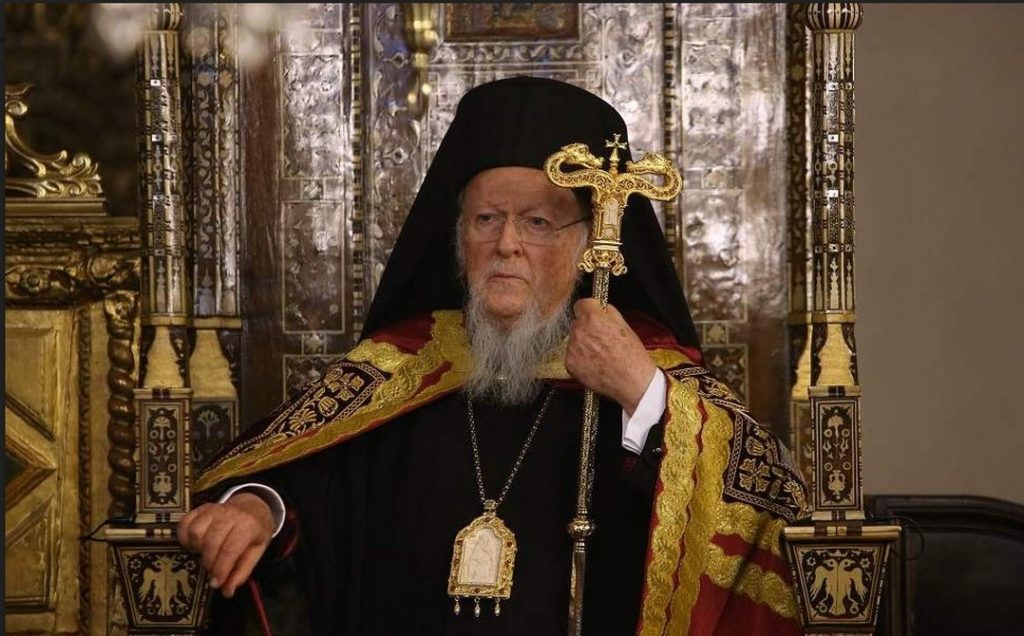 This informative article details how His All-Holiness Ecumenical Patriarch Bartholomew’s swift and decisive action in the face of the Covid-19 pandemic unified the Church, staved off disaster, and protected the faithful. His All-Holiness provided crucial explanations for why it was so important to adhere to the guidelines provided by government and health authorities and overcoming various objections to doing so. These explanations were further elaborated by His Eminence Archbishop Elpidophoros of America for the safety of the faithful of the Omogeneia.

The pandemic, Greece and the Patriarchate

Read this article on the web site of Ekathimerini

The Covid-19 pandemic has not only exposed the vulnerability of the international order and the interdependence between states and peoples across the globe. It has also served as a yardstick for the performance of states, international organizations and institutions, which responded to the crisis with variable success rates. The decision of the Greek government to take early and concerted measures paid off, and Greece emerged as one of the role model countries with the most effective response to the crisis, generating much-needed positive publicity in the international media. Following a decade of deep economic, political and social crisis, Greece was no more the bete noire of the West. In the crucial first weeks of March, however, when the Greek government was taking early bold steps to stem the spread of the virus, including restricting attendance of religious services, its policy found a strong supporter in the Ecumenical Patriarchate. Restrictions to religious services raised sensitive questions about balancing religious freedom and public health and stirred identity politics in Greece as in many countries around the world. The question of church attendance appeared as a litmus test for the government’s ability to implement its anti-Covid-19 pandemic plans. The Patriarchate’s support proved crucial, given the ambivalent position of the Church of Greece.

As the Church of Greece appeared split, with several bishops opposing restrictions to mass attendance and accusing the government of persecuting Christianity, the Ecumenical Patriarchate took the initiative and framed the incipient debate. With a video message on March 18, Ecumenical Patriarch Vartholomaios fully endorsed social distancing measures and framed his position on a sound theological basis: Observing social distancing measures was not a violation but a realization of God’s will. Science and faith were not juxtaposed but stood on the same side of the struggle against the Covid-19.

“In this struggle, our appointed states, governments and appropriate health authorities have the primary responsibility for planning, confronting and overcoming this crisis…. Therefore, our dear children, we entreat you as your spiritual father to respond faithfully and patiently to all the difficult but necessary measures proposed by our health authorities and nations. Everything is being done for our protection, for our common good, in order to contain the spread of this virus. Our liberation from this distress depends entirely on our own cooperation. Perhaps some of you have felt that these drastic measures undermine or harm our faith. However, that which is at stake is not our faith – it is the faithful. It is not Christ – it is our Christians. It is not the divine-man – but human beings. Our faith is firmly established in the roots of our culture. Our faith is a living faith, and there is no exceptional circumstance that can limit or suppress it. What must be limited and suppressed in these extraordinary circumstances are gatherings and large congregations of people. Let us remain in our homes. Let us be careful and protect those around us. And there, from our homes, strengthened by the power of our spiritual unity, let each and every one of us pray for all humankind.… We are certain that, through our prayers as well, science will indeed prevail,” he said in a message.

The Patriarchate’s adamant position proved decisive in convincing the Church of Greece to side with the government and helped the Greek government insist on a seemingly unpopular position to restrict religious services even during the Holy Week and Easter. In a letter Patriarch Vartholomaios sent on May 17 to the primates of the Orthodox churches, he invited them to share their views on the question of delivering Holy Communion under Covid-19 restrictions. After noting that many unprecedented views were heard on how to offer the Holy Communion to the faithful, he added that Orthodox primates could not remain indifferent to this. He also added that the Orthodox Church had been abiding by the guidelines given by health and political authorities and that it would continue to do so, provided that the essence of the Orthodox faith was respected.

His argument was further developed by Archbishop Elpidophoros of America. Based in New York, one of the harshest-hit cities by Covid-19, Elpidophoros tackled arguably the most sensitive issue regarding religious service restrictions, the Holy Communion.

“What is more important for all of us? The Communion, the Body, and Blood of our Lord, Jesus Christ, or the way we receive the Body and Blood? The answer is easy. It’s not the way; it’s the Communion itself that saves us and gives us Eternal Life,” Elpidophoros wrote in the Orthodox Times.

This was not the first time that the Ecumenical Patriarchate took a public position characterized by responsibility and reason. Its circumspect position regarding state-church relations might have been influenced by the caution with which the Patriarchate has managed its precarious relationship with the Republic of Turkey. Yet there is certainly more than that. Throughout his tenure, Patriarch Vartholomaios has put forward an agenda that bridged Christian values with some of the most important debates within post-industrial Western societies. His strong engagement with environmental issues, long before climate change and decarbonization became top items in the global agenda, increased the international legitimacy of the Patriarchate, winning sympathies beyond its traditional constituency, among liberal progressive circles and the global civil society. The Patriarchate’s stance on key issues of Greek foreign policy, with reference to Turkey and beyond, favored moderation and conflict resolution, being in stark contrast with the mainstream nationalist and recalcitrant positions of the Church of Greece, especially under Archbishop Christodoulos. Keeping the Orthodox Church aloof from conspiracy theories, far-right xenophobic and racist political views and reconfirming that it endorses science and its recommendations for deterring the Covid-19 threat, because it stands on the side of life against death, did not only reinforce the appeal of the Ecumenical Patriarchate among Greeks across the political spectrum, in Greece and in the diaspora. It also helped governments across the planet in their fight against the pandemic. By reminding the fundamentals of Christian faith and helping save lives across the globe, the Ecumenical Patriarchate reconfirmed that leading by example is also the wisest way to accumulate soft power within Greece, the Greek diaspora and on a global level.