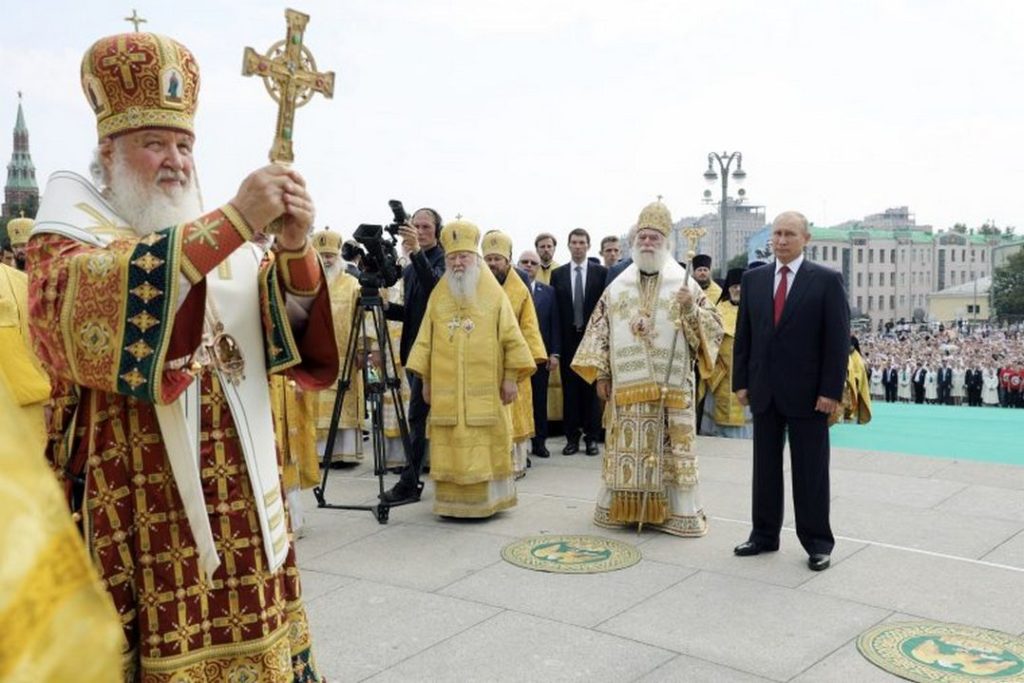 More than a year or so ago I had written on the issue of granting Autocephaly to the Church of Ukraine. We are revisiting the issue today because of the unholy games that some prelates of the ancient and new Patriarchates and from the Autocephalous Churches continue to play by attacking the very heart of the Orthodox Church, the Ecumenical Patriarchate.

Many things have come to light, and many individuals, including patriarchs, archbishops, metropolitans, and priests, have been exposed. It is really interesting to see the masks falling, revealing the faces behind them.

The first thing that has been exposed is the extent of the Moscow Patriarchate’s secular nationalism and its mindset of ecclesiastic imperialism. The unholy games it plays target not only the First Throne, the Church of Constantinople, but the entire Orthodox Church. Let us not forget their attempt to torpedo the Great and Holy Council in Crete in June, 2016.

Moscow has set its sights on recreating a culture of pan-Slavism, and to impose its dominance on the Church, it uses every means against ancient and new patriarchates alike, the latter, unfortunately, having been established for nationalist reasons.The methods the Russian Orthodox Church used to acquire Autocephaly are well known. It is a subject for another analysis in the future.

The methods used by the Church of Greece must also be noted, the coup mindset and treachery of Theoclitus Farmakidis, who really poisoned the ecclesiastical foundation and identity of Greece and cut it off, fortunately only partially, from its ecclesiastical heart, which is the Ecumenical Patriarchate.

Let me remind here that the Ecumenical Patriarchate has the historical, canonical, and ecclesiological privilege and responsibility to grant Autocephaly, Autonomy, or Patriarchal status to a local Orthodox Church because the Patriarchate is the First Authority. It follows, therefore, that what it bestows it can revoke, from among any of those local Churches or new patriarchate – not, however, from the five ancient patriarchates.

Regarding Greece, the Ecumenical Patriarchate can recall the Decision (Praxis) of 1928 about the Metropolises of the New Lands of Greece, and also the Autocephaly itself. The degree of the ecclesiological confusion in Greece is manifested vocally when they commemorate the Synod the during the Holy Eucharist. If there was ecclesiastical maturity and real love about the great and essential things of the Church and Genos, the Church of Greece should have been the first Church decades ago to request the lifting of its Autocephaly.

Unfortunately, some hierarchs and priests of the Church of Greece are Mitralies (mother killers), attacking their Mother Church, the Ecumenical Patriarchate, even though they received the Priesthood and the High Priesthood from there. Instead of exhibiting gratitude and love, they shoot at their Mother Church in order to be like by a cast of fundamentalists who try to turn the Church into a cult-like following and the Orthodox Faith into an ideology they defend with hate and ill will.

There is also a segment of para-ecclesiastical pseudo-pietists who appear as wise men in order to fuel the pious dedication of their followers, who hold them in mythical awe.

Archbishop Ieronymos of Athens – who a year ago played the game of the Turks and Russians with his unbecoming behavior, refusing to receive His All Holiness Ecumenical Patriarch Bartholomew during his visit to Athens – should stand firmly by the Patriarch’s side. Ieronymos realized his huge mistake and attempted to repair things by visiting the Patriarch on his name day last June at the Phanar.
Archbishop Chrysostomos of Cyprus should ignore the weak voices of a few reactionaries and continue to stand unfalteringly with the Ecumenical Patriarch.

The above-mentioned prelates, instead of playing games, should assume the responsibility of talking to Russians and other Slavs and most especially to Patriarch Kirill of Moscow and his protégé Metropolitan Hilarion of Volokolamsk, about ecclesiastical prudence, because it seems that Hilarion is driving the Church of Moscow to lost ways and down wrong paths.