Ankara has granted Turkish citizenship to several clergy of the Ecumenical Patriarchate, of which 4 are Metropolitans.

A few days ago, Ankara gave Turkish citizenship to 10 clergy of the Ecumenical Patriarchate, four of which have the rank of Metropolitan, namely:
Metropolitan Emmanuel of France,
Metropolitan Athenagoras of Kydonia,
Bishop Arsenius of Austria,
Bishop Maxim of Silivri. 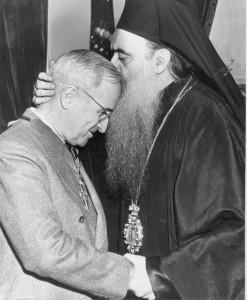 We remind you that in accordance with the laws in force in Turkey, only Turkish citizens can occupy the position of Patriarch of Constantinople. The only exception was Patriarch Athenagoras (Spirou, 1972), former Archbishop of America, whose candidacy was imposed by the United States of America. He traveled to Istanbul in the US presidential plane made available by President Truman. Upon arrival in Istanbul, a representative of the authorities hand-delivered a Turkish passport to him on the plane.