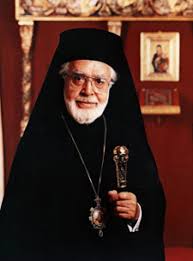 BOSTON – Thirty-six years ago, in a “confidential memorandum” to the late Ecumenical Patriarch Athenagoras of Constantinople and the Holy and Sacred Synod of the Ecumenical Patriarchate (dated July 5 1970), then Archbishop Iakovos of North and South America requested that decisions be made on a number of issues, including the Masons, homosexuality, marriage for bishops and abortion.

“Most of our Christians here are masons,” Iakovos told Athenagoras and the Synod. The Patriarchate did not reply to Iakovos, or if it did, the reply has not been revealed as of yet. But in his “confidential memo,” the contents of which are published in Rev. Dr. Demetrios J. Constantelos book, “My Care,” Iakovos wrote: “Our Church, which is a living and vibrant Church, recognized as one of the four major Churches in America, should not procrastinate and wait forever to take positions on the burning issues of our times, for which all the other Churches have already taken a positive or negative position.”

According to Father Constantelos’ new book, Iakovos identified the burning issues as follows:

1. War and peace
2. Social justice
3. Contraception
4. Abortion, legitimate and illegitimate conception
5. Homosexuality
6. Marriage after ordination, as in the case of numerous twice-married priests in the Orthodox Churches of Romania and Serbia, Iakovos noted.
7. Married Bishops. There was a practice in the ancient Church, Iakovos argued, and it should probably be established for the Church in America.
8. Masonry.
9. Praying together with Christians of other denominations or the administering of sacraments to non-Orthodox, which the Patriarchate of Moscow has permitted.
10. The issue of the validity of the sacraments of the Roman Catholic and Anglican Churches, with whom Orthodox faithful in America often enter into marriage.
11. The issue of a special Service that will be used for the blessing of marriages between an Orthodox and a Jew. “As it is known, Roman Catholics and Protestants bless marriages between Christians and Jews, Moslems, or another religion.”

In his book, Father Constantelos also discloses that Archbishop Iakovos was constantly pressing the Patriarchate for increased use of the English language in Church services (something the late Archbishop later regretted).

Iakovos was speaking about the formation of a “new Orthodoxy” in America, and recommended reforms consistent with the existing polity of the Orthodox Church in America, and the phronema (mindset) and ethos (way of life) of its faithful, but Athenagoras and his Synod did not agree, letting Iakovos’ memos go unanswered.

Iakovos urged the Patriarchate to grant greater administrative autonomy to the Greek Orthodox Archdiocese of North and South America, or to institute a united Pan-Orthodox Church, the Archbishop of which would be elected by the Ecumenical Patriarchate, and who would be of Greek heritage.

Iakovos predicted that, if the various Orthodox jurisdictions were not united under one administrative body, the Greek Orthodox Archdiocese would dissolve within 20 years.
“I am afraid that we have no choice. There are two options, and one of them is not a solution. It is rather dissolution, which will continue as the Greek Orthodox Archdiocese will gradually grow further and further apart from Greece, and from the Ecumenical Patriarchate. The only other solution, which is the most difficult one, is the unification of all Orthodox under one leadership, which will always remain in the hands of Orthodox of Greek descent, if I judge correctly from the dynamism, organization, and influence Greek Americans enjoy in all aspects of life in America today.”