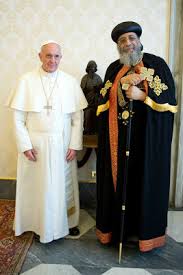 The head of the Coptic Orthodox Church has written to Pope Francis, proposing that Catholics and Orthodox agree on a date for the celebration of Easter, the Fides news service reports.

Coptic Pope Tawadros II sent his message to Pope Francis on the anniversary of their first meeting in Rome. In return, the Roman Pontiff asked the Egyptian prelate to send a representative to attend the October meeting of the Synod of Bishops.

A shared date for Easter celebrations would be a boon to Christians in the Middle East, where Catholic and Orthodox communities often live side by side in predominantly Muslim countries.