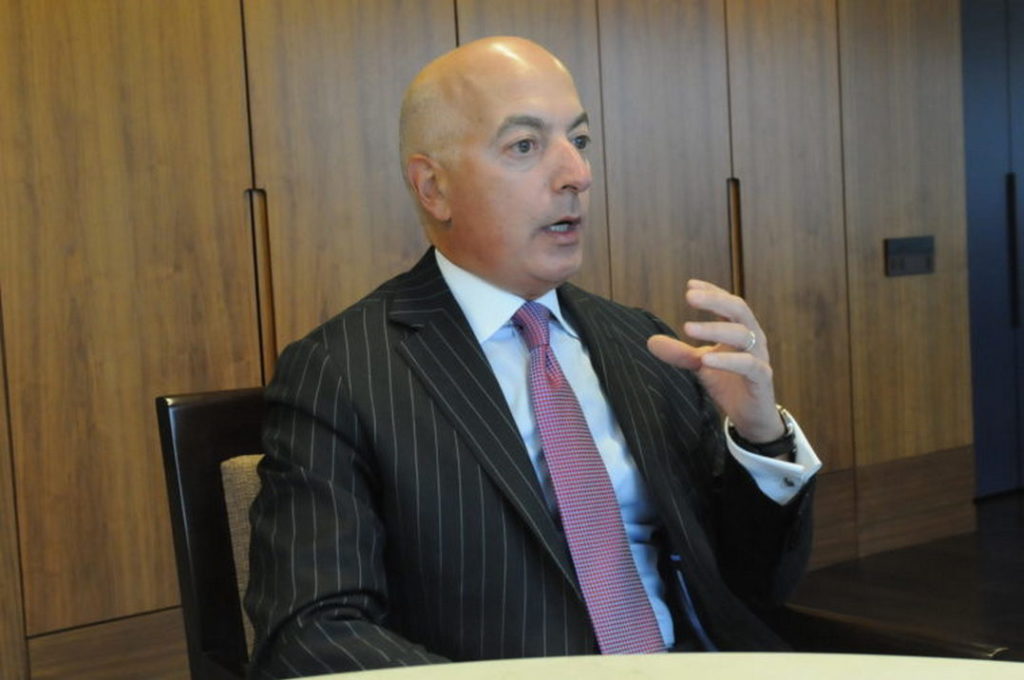 BOSTON – The construction of the St. Nicholas Greek Orthodox Church and National Shrine has already resumed according to Dennis Mehiel and Michael Psaros, chairman and vice-chairman, respectively, of Friends of St. Nicholas, who spoke to The National Herald during an exclusive and extensive interview.

They also said that “the net cost” to complete the Church, interior and exterior, is $42 million, and they spoke about the fundraising efforts that are underway.

The National Herald: Thank you for this exclusive interview with TNH.

Dennis Mehiel and Michael Psaros: We would like to thank you, Theodoros, and the National Herald for your critical support of the St. Nicholas Greek Orthodox Church and National Shrine. Friends of St. Nicholas is committed to complete transparency with our omogenia with respect to our efforts to rebuild the National Shrine. This will be the first of many interviews with the TNH. We also commend Mr. Antonis Diamataris for his recent service to the Hellenic Republic. He served Greece with honor and distinction, and we are truly grateful for the enormous impact he made on Diaspora relations with Greece in a very short period.

TNH: Please explain, what is Friends of St. Nicholas?

DM & MP: Friends of St. Nicholas (Friends) is a new, not-for-profit organization with the exclusive responsibility for the rebuilding of St. Nicholas Greek Orthodox Church and National Shrine (National Shrine). Friends is responsible for raising the money to rebuild St. Nicholas, supervise and manage its construction, and conduct appropriate audits. Friends is managed by a thirteen-member Board of Trustees. His Eminence, Archbishop Elpidophoros of America, will serve as the Honorary Chairman of the Board on behalf of Greek Orthodox Archdiocese of America. Dennis Mehiel is the Chairman of the Board, Michael Psaros is Vice Chairman, and Richard Browne will serve as COO of construction. The balance of the Board is comprised of a group of exceedingly accomplished businessmen and women from across the United States, including Maria Allwin, John Calamos, John Catsimatidis, (Vice-Chair of the Archdiocesan Council), Chrysa Demos, John Georges, George Mihaltses, John Payiavlas, Dean Spanos, and George Stamboulidis. Father Alexander Karloutsos, Vicar General of the Archdiocese, who has been at the forefront of this cause since 9/11, will act as Spiritual Advisor to Friends.

The Board members are deeply committed to completing the National Shrine and are putting their names and reputations on the line by volunteering for this mission. The Board members understand the enormity of the task before us, and we undertake this ministry with humility and reverence. We look forward to working with the omogenia, with confidence and conviction, to complete the National Shrine.

TNH: Please tell us about your meeting with Governor Andrew Cuomo

DM & MP: On January 2, 2020, Governor Cuomo and Rick Cotton, Executive Director of the Port Authority of New York and New Jersey, made a historic visit to the Archdiocese to meet with His Eminence, Archbishop Elpidophoros, to announce the creation of Friends and the resumption of construction of St. Nicholas. His Eminence, Elpidophoros, gave his promise to Governor Cuomo that the National Shrine will be completed by September 11, 2021. Also in attendance were John Catsimatidis, Dennis Mehiel, Michael Psaros, and Father Alexander Karloutsos, Vicar General of the Archdiocese. Everyone in the room understood we were witnesses to history, given the magnitude of the moment and the critical importance of completing the National Shrine. Governor Cuomo and all present spoke with humility, sincerity, and respect. Governor Cuomo said that “St. Nicholas is not just a national shrine, but a rather a global shrine. St. Nicholas is a symbol of peace and unity to a country that is desperately divided and to a world that is in chaos.” His personal conviction was not just clear, but deeply moving, and he pledged the unconditional support of the State and the Port Authority to our effort. We thanked Governor Cuomo and Rick Cotton for their extraordinary support of the National Shrine.

Theodoros, this very public meeting puts an end, once and for all, to the stunningly absurd “assertions” made by some in our omogenia that the State or the Port Authority were going to “take away” our National Shrine. The National Shrine will be completed.

TNH: How much money is totally required for the finish?

MP: Richard Browne has consulted with the General Contractor and critical subcontractors for almost a year. The estimated cost to complete the National Shrine is $45 million, including a $3 million contingency reserve (that we do not intend to spend). Therefore, the “net cost” to complete the Church, interior and exterior, is $42 million. The net cost to complete the National Shrine assumes construction begins in January 2020 (it has) and continues without interruption. Any delay or interruption of construction may result in an increased cost to complete. Richard Browne is working with the General Contractor with respect to “guaranteed maximum price” contracts to lock this cost down and provide us with certainty.

Please note that all subcontractors of the project were paid in full for amounts owed up to the termination of construction in December 2017. Friends launched its effort with a ‘clean slate’. We thank the Archdiocese for its herculean efforts to put Friends and the project in this position and for extending a $3 million loan to St. Nicholas used to repay vendors who were owed money at the time construction was terminated. As the former Treasurer of the Archdiocese, I must observe this demonstrates the impact of the successful financial restructuring of the Archdiocese.

TNH: Who is Richard Browne?

DM & MP: We are very grateful that Richard volunteered to act as Friend’s COO of Construction and are confident that the construction component of completing the National Shrine is in professional, experienced, and accomplished hands.

Richard is a proud Hellene and the Managing Partner of Sterling Project Development Group, an affiliate of Sterling Equities. Its ownership group also owns and operates the New York Mets baseball team. Richard’s firm is currently involved in approximately $12 billion worth of development projects across its advisory portfolio.  Richard had a successful career as a builder and commercial building owner and project consultant. He has been involved in the coordination and supervision of over $7 billion worth of commercial, residential and sport-related properties. He served as the owner’s representative to Queens Ballpark Company, L.L.C, which spearheaded the development and construction of Citi Field.

TNH: Where does the St. Nicholas issue stand as we speak?

DM & MP: We are very encouraged and excited by the progress made by Friends since we launched on January 2nd.  Friends is working with Father Alex to raise the funds required to build the National Shrine. We are pleased to announce that as of January 31st, we have raised $10 million of cash and pledges in only a month – a thavma (miracle). Fundraising momentum has exceeded even our ambitious expectations. As a result of the donors’ philanthropy and faith, Friends has already made $5.75 of cash payments to critical vendors of the project and received an additional $4 million of pledges. We thank the donors that made this possible.  Therefore, Friends needs to raise an additional $32 million to complete the National Shrine. We expect to announce some very major donations in February that will push the project much closer to its fundraising goal. The National Shrine will be completed.

TNH: How will the philanthropy of the donors by recognized?

DM & MP: The National Shrine will recognize each and every single donor. At this time, we believe that St. Nicholas will use a system similar to the one used at Ellis Island. It is important that the logia from the Omogenia should be recorded and recognized forever. With this system, one hundred years from now, the Faithful in the future will know who contributed to the establishment of the National Shrine.

TNH: When the will construction work restart?

DM & MP: Construction has already started. The critical subcontractor in charge of the National Shrine’s exterior wall is working. The work is occurring at a fabrication facility in the Midwest. This is very exciting. We plan on visiting this contractor soon and will send the National Herald pictures of the progress.

TNH: Don’t you think this is an extremely expensive project for a nave with a capacity of 144 people?

TNH: Can you please tell our Community if any financial irregularities took place in the first phase of the project and if yes, by whom?

DM & MP: Theodoros, this is the final time we will address this subject. The answer is there were no financial irregularities, no fraud, theft or malfeasance with respect to St. Nicholas. Period. The subject matter is closed. The Archdiocese formed a Special Investigative Committee that hired PWC and Baker Hostetler. Two audits were performed over an almost two-year period. The result was clear. PWC said that funds were expended consistent with the wishes of the donors. The Archdiocese has issued numerous press releases on this matter and posted the two audits on its web site.  We rely on the integrity of PWC and these audits. Anyone who believes fraud occurred with respect to the finances of the National Shrine during the time before construction was terminated should read the PWC audits.

TNH: How do you feel now that the task of finishing this historic project is in your hands as chairman and vice chairman of Friends of St. Nicholas?

DM & MP: The weight of this responsibility on our shoulders is extraordinary. There is nothing in our business careers and in our decades of service to the Church in other capacities that compares to this responsibility. This is our diakonia to Orthodoxy and the Church in America. We are honored and blessed to work on behalf of the National Shrine and are humbled by the collective prayers and encouragement by our omogenia to complete this ministry.

TNH: What is the role of the new Archbishop Elpidophoros of America in the project?

DM & MP: The enthronement of His Eminence, Archbishop Elpidophoros was the catalyst required to complete the National Shrine. He has restored the omogenia’s confidence in the Archdiocese, made very substantial changes in its leadership, and is driving a very clear vision for the Orthodox Church in America in the 21st Century. He is a man of action, not talk. He is a truly inspirational leader who encourages you to pick up your cross and follow the Lord because of his actions and not words. His election was the key to completing the National Shrine.

TNH: Please convince our Omogenia why it should support the built of St. Nicholas?

DM & MP: Friends does not have to convince the Omogenia. The Omogenia understood the moral obligation to rebuild St. Nicholas as soon as we heard the tragic news that it was destroyed on that horrific day almost twenty years ago.

The Omogenia’ s faith manifested by prayers for this ministry and extraordinary philanthropy speak for themselves.  The facts are self-evident.

The National Shrine will be the only religious institution on Ground Zero, a symbol and beacon of global Orthodoxy, and the most visited Church in New York. It will also stand as an immortal monument to the memory of the 3,000 people who were murdered and martyred on September 11, 2001.

His Eminence Archbishop Elpidophoros has stated with conviction that completing the St. Nicholas Greek Orthodox Church and National Shrine is the single most important civic act of the Orthodox Church in America since Archbishop Iakovos marched across the Bridge at Selma with Dr. King. His Eminence also believes that the completion of the National Shrine will be a symbol of the resurgence of the Greek Orthodox Archdiocese of America, resulting in the re-engagement of our Faithful, the Nation, and the world with renewed vitality.

The National Shrine will also be a symbol to the world of New York’s and America’s resilience, a living icon of American values and value system, and a declaration of America’s commitment to freedom.