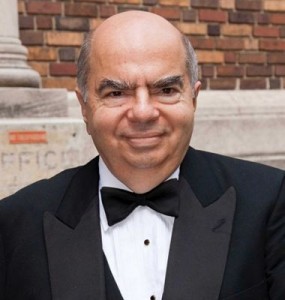 Emanuel G. Demos, a Manhattan tax lawyer active in the Greek Orthodox Church and father of recent Republican congressional candidate George Demos, has died. He was 75.

NEW YORK – Among Greek-Americans, a conversation about paragons of dedication to the community would quickly include the name of Emanuel George Demos, distinguished attorney and churchman. On April 16 the Center for Byzantine and Modern Greek Studies (CBMGS) of Queens College with the support of the Kallinikeion Foundation presented the first annual lecture in his memory.

George Demos, attending with his mother, Helen, his wife, Chrysa, and other family members, thanked the hosts for the event and the speakers “for their touching and beautiful words.”

When friends and family sought an appropriate lecture topic for the celebration his life in the Ballroom of Holy Trinity Cathedral, they agreed it should reflect Demos’ tireless work as General Legal Counsel of the Archdiocese of America.

They invited the Rev. Dr. Patrick Viscuso, an Orthodox priest and a specialist in Byzantine history and Orthodox canons as the featured speaker. He explained that Demos’ work ranged from composing regulations for the archdiocese, informed by his legal mind and his experience as a member and leader of the community to successfully defending the positions of the Archdiocese in a lawsuit in New York.

Attorney Christ Stratakis, Demos’ co-laborer in numerous organizations, highlighted Demos’ work on the legal committee of the Order of St. Andrew in defense of the Ecumenical Patriarchates and religious freedom in Turkey.

Fr. Viscuso said Demos asked for his help on the lawsuit. He provided the necessary canonical and historical background for the complex case that turned on the judge being able to properly understand the hierarchical character of the Orthodox Church and the roles of clergy and laity.

“I will present Manny Demos’ portrait of what a parish should be within the Greek Orthodox Archdiocese, and what was in him mind, as he defended “against ideas that are foreign to our orthodox conception of church.”

Demos understood that in America the Church needed to steer a middle path between its Protestant and Catholic neighbors.

Fr. Viscuso explained the danger posed by ideas that separate the spiritual and material, contrary to Orthodox theology which places such ideas in the context of the incarnational reality of Christ and His two natures, human and divine.

According to Orthodox anthropology, man is a unity of body and soul, which makes it wrong to say, as many do, that the priest should be exclusively concerned with services and theology while the laity have the first and last say on administrative and financial matters.

He said the clergy share the stewardship responsibilities in the financial realm and that for laypersons “to serve on the parish council is also ministry.”

By also emphasizing the importance of transparency and cooperation between clergy and laity in the operation of the Church, he noted that there is common ground between priests and laypersons concerned about the governance of the church but which were expressed in a misguided way through the lawsuit.

Fr. Viscuso pointed out the sources of misunderstandings and explained that Orthodoxy and Catholicism have very different conceptions of the canons. “Canons in the Orthodox Church are standards by which we live, not laws,” he said.

From the Protestant side the Church must fight “congregationalism” that puts the laity in complete control of the parish and neglects of oversight role of the bishop.

Rev. Dr. Robert Stephanopoulos, the Cathedral’s Pastor Emeritus who worked with Demos for many years, spoke about the man who became a dear friend, a title many of his acquaintances aspired to.

He informed that Demos grew up in New Britain, CT, where his devotion was born that “led him to use his skills and training as a lawyer for the best interests of the church.”

Fr. Stephanopoulos said that as a Board member and president of the Cathedral Demos offered many services but he was especially concerned about education.

Christos Ioannides, the Director of the CBMGS, said of Demos, “I witnessed the modesty of a remarkable man, and I was blessed with his friendship. I consider myself fortunate that our paths crossed.”

As a member of the Board of Advisors of the CBMGS and president of the Kallinikeion Foundation, Demos spearheaded the effort to establish the chair of Byzantine Studies at Queens College currently held by Prof. Warren Woodfin, who served as the evening’s Emcee.

Dr. Ioannides praised Demos for his work in behalf of the Center and also spoke of his knowledge and appreciation of Byzantine Civilization. “With the Kallinikeion chair Byzantine studies became institutionalized at the Center.

He also thanked Effie Lekas, his Assistant Director, for organizing the event.

Theodore P. Kusulas, Head of the Cathedral School praised Demos for laying “a wonderful foundation as school board chairman,” – indeed, many call Demos the School’s savior.

Stratakis marveled that, “he always spoke in measured terms, made valuable and sensible suggestions and made us think when he spoke.”

More than one person during reception that followed spoke of how much those qualities are missed by the community.