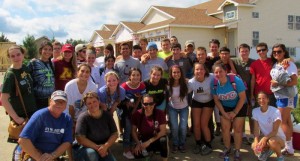 Orthodox Christian high school students representing 27 different dioceses under the Assembly of Canonical Orthodox Bishops in the United States of America gathered this summer in Minneapolis for a National IOCC Serv-X-Treme! conference. The youth took part in reflections on social service in the context of their Orthodox faith and joined in service activities ranging from building homes for the disadvantaged, distributing books to at-risk youth, and preparing and serving meals to the homeless. photo: IOCC

Baltimore, MD (IOCC) — More than 50 Orthodox Christian high school students representing over 30 different dioceses under the Assembly of Canonical Orthodox Bishops in the United States of America gathered this summer in Minneapolis and Chicago for two Serv-X-Treme! conferences. Participants strengthened their understanding of Christ-centered service and Orthodox Christian philanthropy through theoretical and hands-on service activities at the week-long gatherings.

“Being given the opportunity to practice my faith in so many different environments was truly a blessing,” said participant Dimitri Godur of Miami, Florida. “Our projects and discussions truly gave me a different and fresh perspective on what it means to serve God through others, and being able to put these ideas into practice was also a blessing.”

Youth participants in the August conferences were appointed by their respective hierarchs and represented the pan-Orthodox community from around the country. During the conferences the youth took part in reflections on social service in the context of their Orthodox faith, heard from Orthodox Christians about how they have incorporated service into their lives, participated in daily services and the Divine Liturgy, and joined in service activities ranging from building homes for the disadvantaged, distributing books to at-risk youth, and preparing and serving meals to the homeless.

“The Serv-X-Treme Conferences give our young people the opportunity to learn about the ethos and approach of Orthodox philanthropy and then go out and do it,” said IOCC U.S. Country Representative, Dan Christopulos. “Our goal is for the participants to continue engaging in such philanthropy and helping to lead such efforts in their own parishes and local communities.” 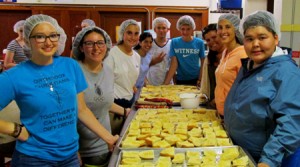 The national conference in Minneapolis was made possible with the generous support of the Archbishop Iakovos Leadership 100 Foundation while the Chicago-land gathering received the generous support of the John C. Kulis Charitable Foundation. “I didn’t have a lot of experience with community service and philanthropy coming in and this trip opened my eyes to all the ways I could help others,” said Sia Konstantinopoulos of Akron, Ohio. “I think the greatest “ah ha” moment for me was just interacting with the people we were serving. I had never really been around poverty before and I think I had a lot of judgements going in. When I actually got to know the people we served all of my negative stereotypes were washed away.”

For many of the participants the conferences also provided the first opportunity to interact with peers from Orthodox Christian jurisdictions other than their own. “All of us who were involved will strive to serve our communities inside and outside of our parishes as well as cement the gaps between our varying Orthodox jurisdictions, as in the end, we are all truly brothers and sisters in Christ,” said Godur. “I hope to take what I have learned and go out and serve the community through various hands-on projects, just as we have done through Serv-X-Treme.”

The Serv-X-Treme! Youth Leadership Conferences are part of a broader effort by IOCC to develop the Orthodox Christian Action Network (Orthodox CAN!), a US-based initiative to nurture and activate the Orthodox community’s value of philanthropy through volunteerism across all age groups. The program also promotes and supports an Orthodox Christian Emergency Response Network (ERN) of more than 100 clergy and laity members, trained to respond in times of disaster, and the development of volunteer opportunities through parish-based community service projects such as emergency kit assembly and emergency preparedness.

ABOUT INTERNATIONAL ORTHODOX CHRISTIAN CHARITIES
IOCC is the official humanitarian aid agency of the Assembly of Canonical Orthodox Bishops of the United States of America. Since its inception in 1992, IOCC has delivered $534 million in relief and development programs to families and communities in more than 50 countries. IOCC is a member of the ACT Alliance, a global coalition of more than 140 churches and agencies engaged in development, humanitarian assistance and advocacy, and a member of InterAction, the largest alliance of U.S.–based secular and faith-based organizations working to improve the lives of the world’s most poor and vulnerable populations. To learn more about IOCC, visit iocc.org.