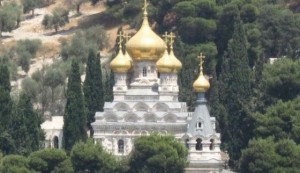 Monks of the Russian Orthodox Monastery of Saint Mary Magdalen complain that local residents enter the grounds without permission to swim in the hot springs and have barbecues.

Israeli authorities have confiscated land belonging to the Russian Orthodox Monastery of Saint Mary Magdalene, on the Kinneret near Tiberias, for the development of a recreational area, according to the Orthodox Christian Network website.

The monastery is located close to the modern town of Migdal, formerly Magdala, where Mary Magdalene was reputedly born.

The land was acquired in 1908 by Archimandrite Leonid Sentsov, then-director of the Russian mission in the Holy Land, and a small church was built there in the 1960s. The monastery’s garden has warm springs which reputedly have therapeutic properties.

The Russian news agency Interfax reported that local residents of the area regularly destroy the property’s fence, despite a sign reading “Private Property,” in order to swim in the hot springs and have barbecues, leaving behind trash and fires.

The monks have also complained that part of the grounds have been turned into a free beach, with large crowds and loud music. Crucifix mosaics that the monks put in the monastery’s basins to prevent people from using them have been disabled and stolen, according to the report.