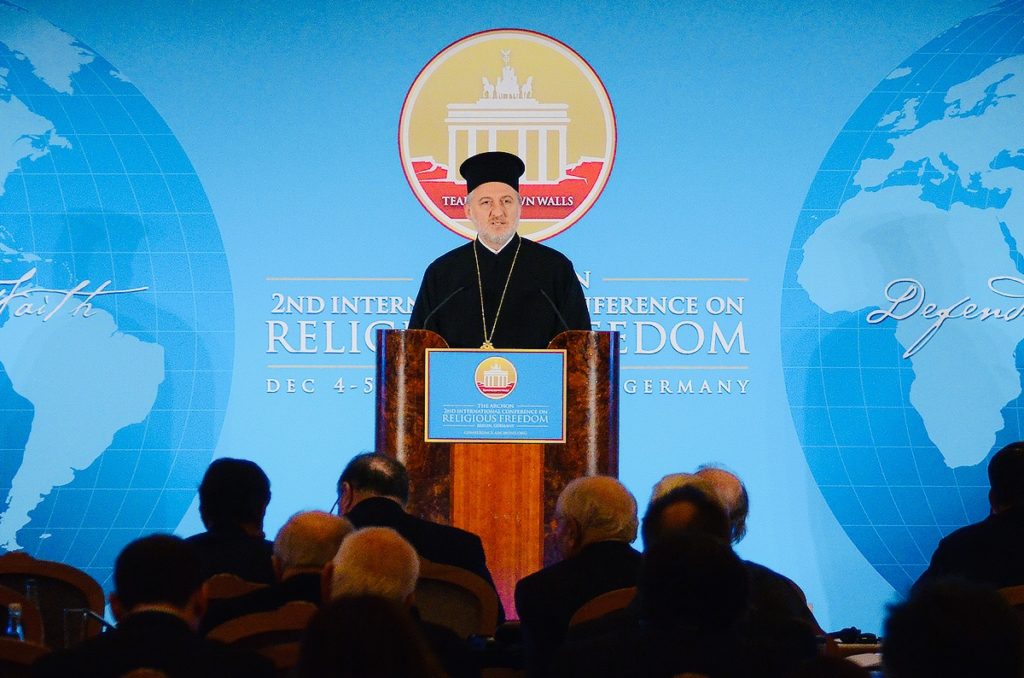 The Order of Saint Andrew is pleased to forward the announcement from the Ecumenical Patriarchate on May 11, 2019 on the unanimous election of His Eminence Metropolitan Elpidophoros of Bursa as Archbishop of America.  The announcement is as follows:

“Today, Saturday May 11 2019, the Holy and Sacred Synod, continuing its work, proceeded to fill the vacated seat of the Archdiocese of America following the voluntary resignation of its shepherd, His Eminence Archbishop Demetrios Geron of America.

“Therefore, following the suggestion, permission and exhortation of His-All Holiness, the holy synodical members dully casting their votes unanimously elected as Archbishop of America His Eminence Metropolitan Elpidophoros of Bursa, Abbott of the Holy Monastery of the Holy Trinity in Halki and Professor of the Theological School of the Aristotelian University of Thessaloniki.

–From the Secretariat of the Holy and Sacred Synod”
In a letter to His Eminence Archbishop-elect Elpidophoros, National Commander Dr. Anthony J. Limberakis stated,

“On behalf of all the members of the Order of Saint Andrew, Archons of the Ecumenical Patriarchate in America, I express the tremendous joy and satisfaction of the Order for your election today to the Eparchial Throne of America. As our new spiritual leader and Exarch of the Ecumenical Throne, we Archons of the Mother Church, pledge our fidelity and obedience to Your Eminence as our new Archbishop and the chief shepherd of all Orthodox Christians in the United States of America.

“We are deeply thankful for the providential wisdom and prudence of His All-Holiness Ecumenical Patriarch Bartholomew and the Most Reverend Members of the Holy and Sacred Synod for electing you to the Throne of the Holy Archdiocese of America. We promise to Your Eminence that the Order of Saint Andrew shall lead the way in our support, provision, and promotion of your goals and programs as our new Archbishop.

“Again, please accept our heartfelt congratulations and most sincere best wishes on this historic occasion.”
In his letter to His All-Holiness Ecumenical Patriarch Bartholomew National Commander Dr. Limberakis, stated,

“All of us understand that Archbishop Elpidophoros has been left with numerous challenges to meet and overcome. We pledge to Your All-Holiness that the Order of Saint Andrew shall welcome and embrace him with open arms as Your representative and our new archpastor, and that we shall lead the way in our support, obedience, provision, and promotion of the goals and programs of our new Archbishop.

“In the coming days and weeks as we eagerly await the arrival of Archbishop Elpidophoros, please know and be assured that we shall be ceaselessly preparing the ground for his Archiepiscopal ministry in America.”
Archbishop-elect Elpidophoros was born in 1967 in Bakirköy, Istanbul.  He studied at the Department of Pastoral Theology, Theological School of the Aristotle University of Thessaloniki, from which he graduated in 1991.  In 1993, he finished his postgraduate studies at the Philosophical School of the University of Bonn, Germany submitting a dissertation entitled, “The Brothers Nicholas and John Mesarites.”

He was ordained a Deacon in 1994 at the Patriarchal Cathedral and was appointed as the Codecographer of the Holy and Sacred Synod.  In 1995, he was appointed Deputy Secretary of the Holy and Sacred Synod. From 1996-1997 he studied at the Theological School of St. John the Damascene in Balamand, Lebanon, where he improved his knowledge of the Arabic language.  In 2001, he presented a doctoral dissertation at the Theological School of the Aristotle University of Thessaloniki under the title: “Severus of Antioch and the Council of Chalcedon” proclaiming him a Doctor of Theology.  In 2004, he was invited to Holy Cross Greek Orthodox School of Theology in Boston, where he taught as a visiting professor for one semester.

In March 2005, at the proposal of His All-Holiness, he was promoted by the Holy and Sacred Synod to the position of Chief Secretary and was ordained to the priesthood by the Ecumenical Patriarch in the Patriarchal Cathedral. In 2009, he submitted two dissertations to the Theological School of Thessaloniki and was unanimously elected Assistant Professor of Symbolics, Inter-Orthodox Relations and the Ecumenical Movement. The dissertations are entitled: “The Synaxis’s of the Hierarchy of the Ecumenical Throne (1951-2004)” and “Luther’s Ninety-five Thesis. Historical and Theological aspects. Text – Translation – Commentary.”

In March 2011, he was elected Metropolitan of Bursa and in August of the same year was appointed Abbot of the Holy Patriarchal and Stavropegial Monastery of the Holy Trinity on the island of Halki.  He has served as the Orthodox Secretary of the Joint International Commission for the Theological Dialogue between the Orthodox Church and the Lutheran World Federation and as a member of the Patriarchal delegations to the General Assemblies of the Conference of European Churches and the World Council of Churches.

The Archbishop-elect was also a featured speaker at the 2013 Archon International Conference on Religious Freedom held in Berlin, Germany.