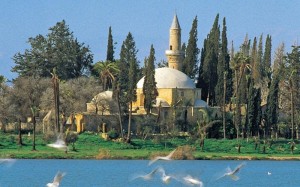 Speaking after morning prayers at the mosque, he thanked everybody who helped make the pilgrimage possible, in particular the head of the Greek Orthodox church Archbishop Chrysostomos and the Swedish embassy here.

“Today’s pilgrimage proves that people of different faith can coexist and live peacefully in the same area with tolerance,” he said, noting that Islam advocates peace. He also said that the faithful must not lose hope for a peaceful solution in Cyprus, divided since the 1974 Turkish invasion.

“Peace for us, peace for all our neighbours,” he added.

Salpy Eskidjian, head of the office for religious dialogue within the framework of the Cyprus peace process, said the pilgrimage showed that religion can play a very positive role in building peace. Respect for religious sites is a fundamental element in the dialogue and the coexistence of people, she said. Such events can build trust and help develop human relations, she added.

Turkish Cypriots and other Moslems who participated in the prayers returned to the northern Turkish occupied areas by bus, escorted by police.

This is not the first time Turkish Cypriot pilgrims from the occupied areas have crossed to the Tekke to pray. Similarly, Greek Cypriot pilgrims have on several occasions been allowed by the occupation regime to pray in Greek orthodox churches in occupied Cyprus.